The Demaria’s lab has a central interest in addressing the molecular mechanisms whereby ionizing radiation modulates tumor immunogenicity, and exploiting this property of radiation to achieve a therapeutic synergy with immunotherapy in pre-clinical tumor models and in cancer patients. We have recently demonstrated that radiation-induced viral mimicry in cancer cells leads to activation of type I interferon via the cGAS/STING pathway. In vivo, this process contributes to the recruitment and activation of conventional dendritic cells type I (cDC1) to the irradiated tumor and promotes cross-priming and activation of tumor-specific T cells. Ongoing work is addressing other pathways that regulate the ability of radiation to generate an in situ tumor vaccine by modulating innate and adaptive immune cells function. In addition, we found that the transcriptional response elicited by radiation-induced DNA damage enhances the expression of immunogenic mutations, and are investigating the radiation-induced changes in the immunopeptidome presented by MHC class I and MHC class II molecules. 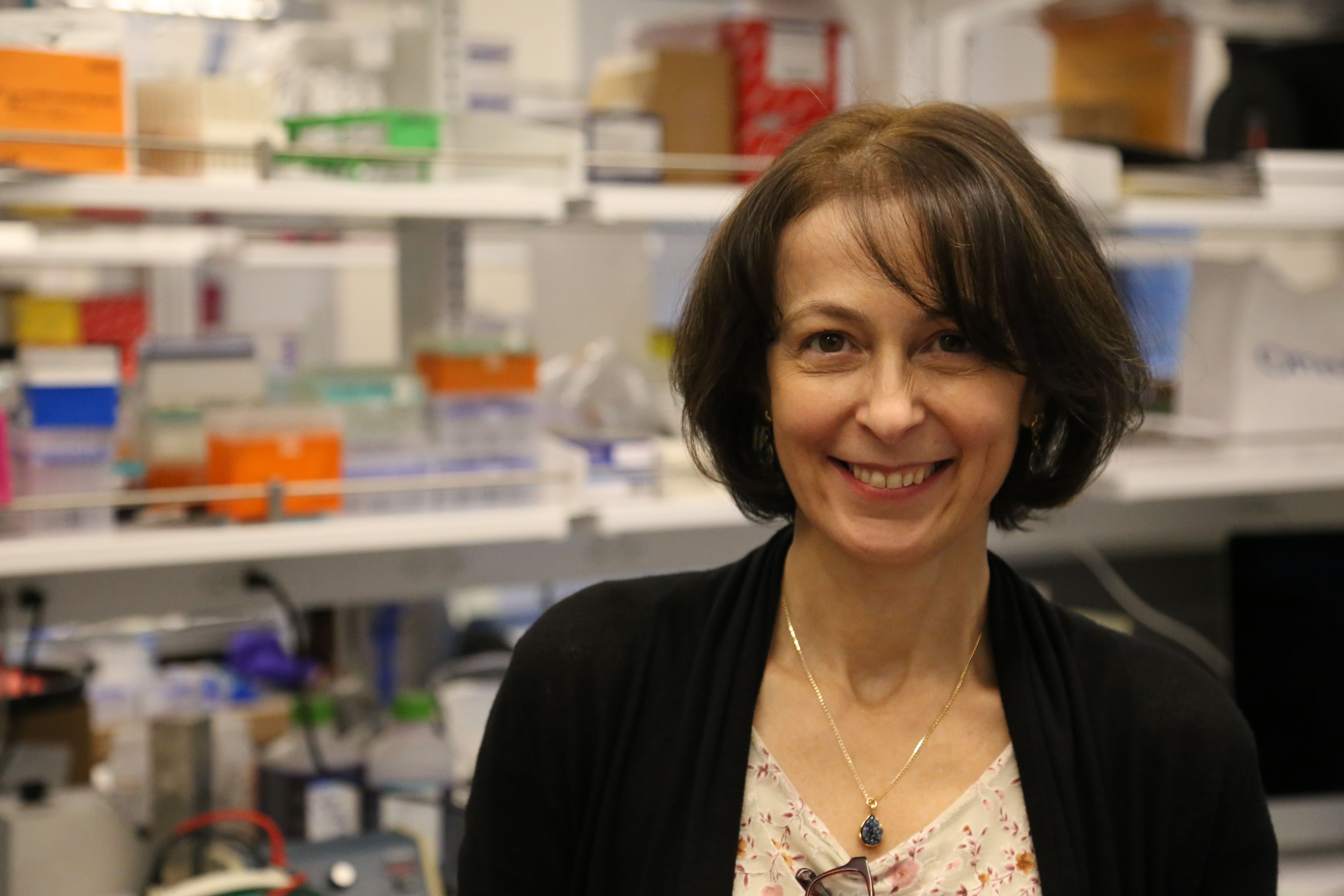 Sandra Demaria, M.D., a native of Turin, Italy, obtained her M.D. from the University of Turin, and then moved to New York for her post-doctoral training in immunology as a Damon Runyon-Walter Winchell Cancer Research Fund awardee, followed by a residency in anatomic pathology at NYU School of Medicine (NYU SoM). She remained on the faculty at NYU SoM until 2015 raising to the rank of Professor. She is currently Professor of Radiation Oncology and Pathology at Weill Cornell Medicine in New York City. Dr. Demaria is internationally known for her studies demonstrating the synergy of local radiation therapy with different immunotherapeutic agents in pre-clinical models of cancer. She was the first to show that radiotherapy can convert tumors unresponsive to immune checkpoint inhibitors into responsive ones, a finding being translated in several clinical trials at multiple institutions. As a breast cancer pathologist Dr. Demaria has also studied the immunological microenvironment of breast cancer in patients, and therapeutic strategies to modulate the immune infiltrate in preclinical breast cancer models. Her current work is funded by the US National Cancer Institute and by several private foundations. She has held leadership positions in national professional societies, including the Society for Immunotherapy of Cancer (SITC) where she served on the Board, the AACR Cancer Immunology Working Group Steering Committee, and the Radiation Research Society. She serves in the editorial board of several journals, including The Journal of Immunology, Cancer Immunology Research, Clinical Cancer Research, and Journal for ImmunoTherapy of Cancer.

Erik Wennerberg obtained his PhD from Karolinska Institutet in Stockholm, Sweden in 2014 with the thesis entitled Natural killer cells in cancer: Studies on migration and cytotoxicity. He later pursued a postdoctoral position in Sandra Demaria’s research lab where his work was initially focused on studying the impact of adenosinergic signaling in shaping tumor immunogenicity following radiation therapy in breast cancer. For this project, Erik was rewarded with the United States Department of Defense Breast Cancer Research Program Breakthrough Fellowship Award in 2016. Recently, Erik has studied the role of ART1 as a mediator of immune resistance in non-small cell lung cancer, and for his work on this project he was awarded with the Society of Immunotherapy of Cancer Presidential Travel award in 2019. In his spare time, Erik plays samba music.

Claire obtained her PhD in Tumor Immunology from the Gustave Roussy Institute in Paris, France. In 2016, she joined Dr Demaria’s laboratory at Weill Cornell Medicine for her postdoctoral training. Her current work focuses on exploring how to use radiation therapy to enhance the expression of immunogenic mutations in a preclinical model of metastatic breast cancer. She is also testing the ability of a new innate immune checkpoint inhibitor to synergize with local radiotherapy to induce anti-tumor immunity. For the latter work, she was awarded the AACR Triple-Negative Breast Cancer postdoctoral fellowship in 2018. She recently received the Young Investigator Award from the Society of Immunotherapy of Cancer. During her free time, Claire enjoys running, hiking and traveling.

Nils-Petter Rudqvist received his M.Sc. (Physics, 2009) and Ph.D. (Medical Science, 2015) from the University of Gothenburg, Sweden. He decided to pursue an academic career and continue with his postdoctoral training in US. He first joined the Center for Radiological Research at Columbia University in New York where he studied gene signatures of radiation exposure.  He then moved to Weill Cornell Medicine to join the program in radiation and immunity under the mentorship of Dr. Demaria. His current research is focused on investigating the T cell response infiltrating tumors following successful treatment with radiation therapy and checkpoint blockade. He recently demonstrated in a mouse model that radiation therapy diversifies the TCR repertoire of tumor infiltrating lymphocytes, an effect crucial for its synergy with immune checkpoint blockade treatment. Nils-Petter has also defined unique patters of expansion of TCR clonotypes in NSCLC patients who respond to treatment with radiotherapy and ipilimumab, and helped identify neoantigens targeted by expanding T cells in one patients with complete response. Great interest in the intersection between computational biology and high throughput immunology. He has published 20+ articles in peer-reviewed scientific journals and 60+ scientific conference abstracts. 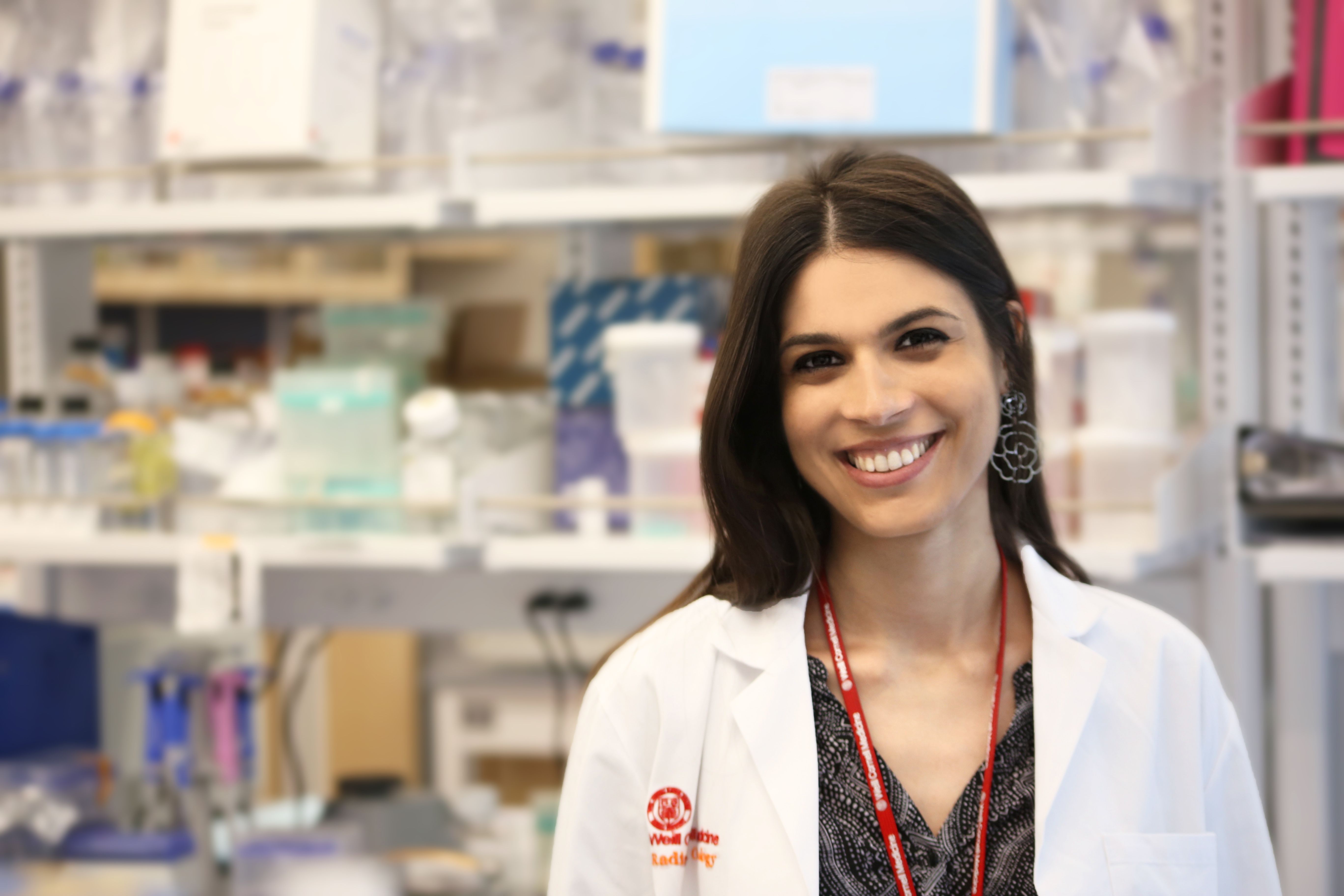 Sheila obtained the B.Sc and M.Sc in Medical Biotechnology at Sapienza, University of Rome and immediately got the qualification as professional biologist at University of Viterbo (Italy). She continued her academic carrier obtaining the PhD in Immunology and Immunopathology at Sapienza and she currently is continuing her studies in Clinical Pathology and Biochemistry at the same University. As PostDoc, she joined Demaria Lab, where she is investigating the immunomodulatory role of exosomes released by cancer cells upon radiotherapy in combination with immunotherapy in anti-tumor immune response. She got the post-doctoral American-Italian Cancer Foundation fellowship for two years. She loves plants and South American literature. 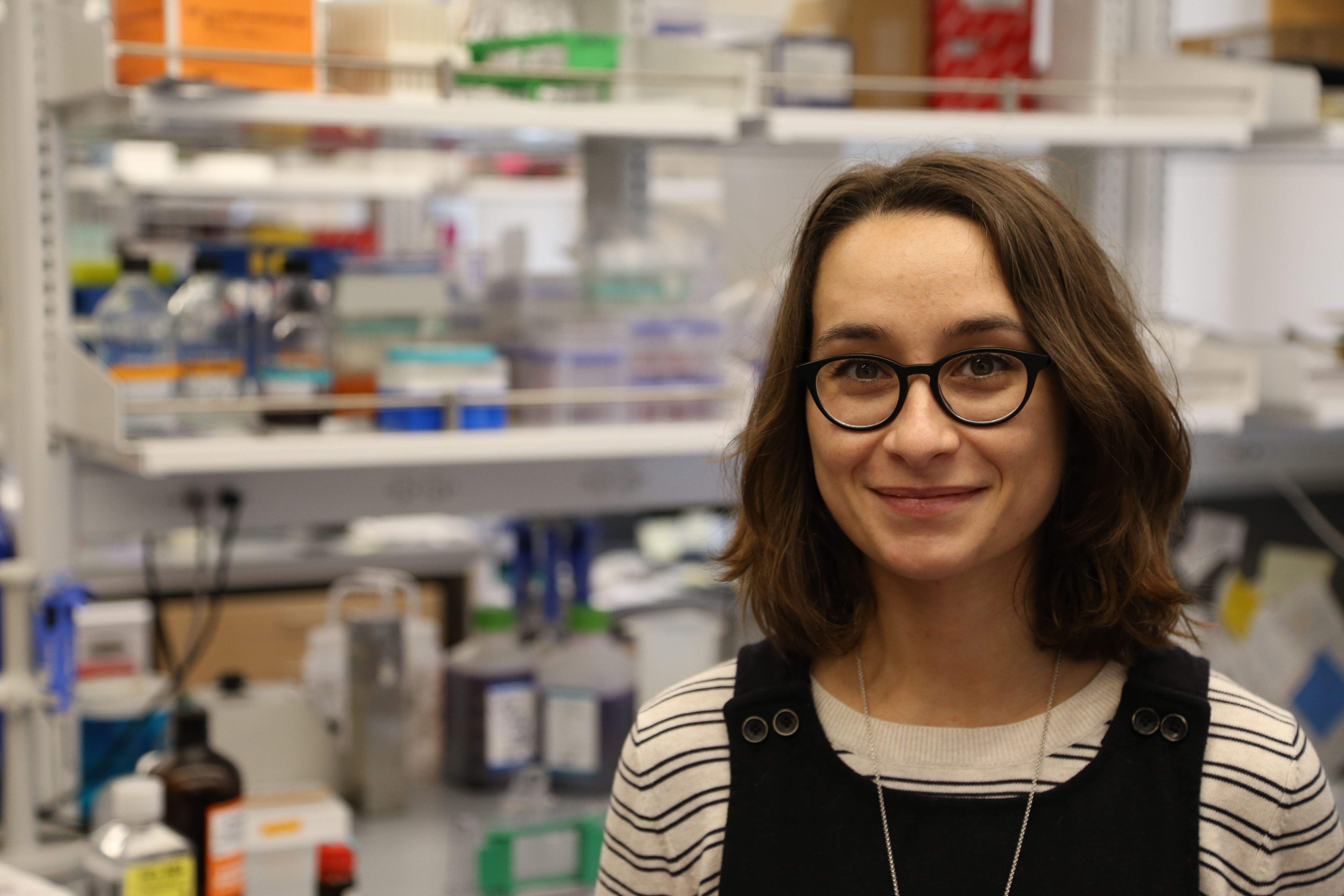 Maud obtained her PhD in Immunology - Immunotherapy from the University of Nantes, France. She joined Dr Demaria’s Lab in November 2018 as a Postdoctoral associate. Her current research focusses on deciphering the molecular mechanisms of cancer cell intrinsic type I interferon responses induced by radiation therapy and improvement of in vivo tumor anti-tumor responses by combination of radiation therapy and immunotherapy treatments. Using 3D in vitro culture techniques, she is also investigating how hypoxia impacts the radiation therapy induced activation of IFN pathway and anti-tumor immune response. During her free time, her favourite activities include reading, visiting the countless art exhibitions/shows of New York and spending time with her friends and family. 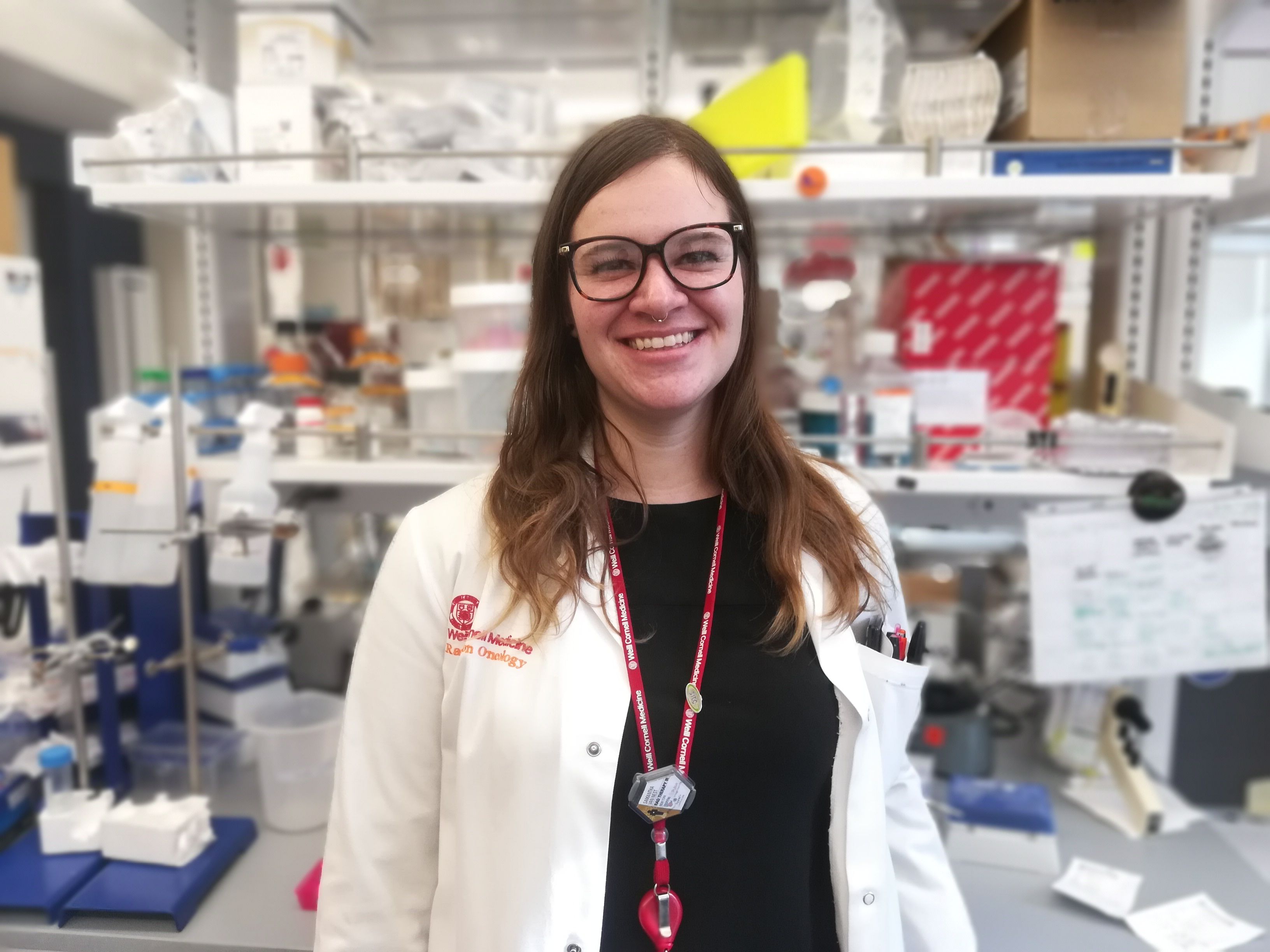 Samantha obtained her PhD in Medical Physics at the University of Victoria on Vancouver Island, Canada. Her research interests include developing techniques for the personalization of radiation therapy including spectroscopic and sequencing approaches. As a Postdoctoral Associate with Dr. Demaria, her research investigates the use of  primary organoid models for optimizing radiation therapy  and immunotherapy combination treatments. She is also developing techniques to use exosome and extracellular vesicles to inform optimal radiation therapy doses for patient treatments. In her free time, you can find Samantha camping in the forests, kayaking, or caving throughout North America.

For a complete list of peer-reviewed publications from Sandra Demaria, please visit here

There are many ways to request for an appointment with us. Give us a call at the information below, login to your Weill Cornell Connect or fill out the online form.

The Arnold Center For Radiation Oncology